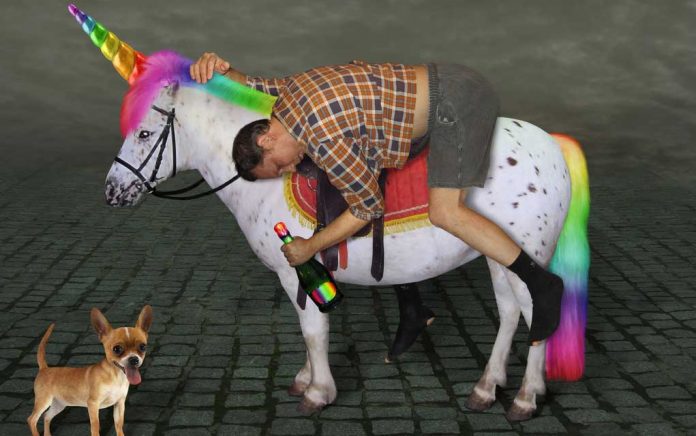 It’s 5 o’clock somewhere, and Happy Hour is well under way. If you clock the patrons of any given bar anywhere in the world, it’s easy to see the signs. The sun signs, that is. Here’s how to pinpoint the sun sign of any drunk in a bar by the way they’re behaving.

If there’s a brawl in a bar, an Aries is pretty sure to be involved. If they aren’t the one throwing punches, they sure as hell instigated it. And then sat back to watch it all go to hell in a handbasket.

Happy drunk Taurus will likely be drinking top shelf liquor and cuddled up with their main squeeze, but if the alcohol goes down the wrong way, expect a little jealousy to come out to play. While they make a dependable ride home for a night, a jealous Taurus is not a person you want driving—even if they’re stone cold sober.

Billiards, darts, beer pong… where there is a game and drinking, you’ll likely find Gem. Gems are mad-talented, no matter how much alcohol they’ve consumed. Don’t let their affable nature fool you. You could lose your shorts or the family farm if you go head to head with them in a game.

If there’s a DD in the group, it’s probably a Cancer, but you can be sure that whether they’re drinking or not, they’ll likely be monitoring everyone’s alcohol and water consumption. They’re also the friend that will ask you to text them when you get home safe if they don’t personally see you to the door.

Locating a Leo in a bar isn’t hard. They’ll either be the center of attention in a crowd of admirers, getting their flirt on at the bar, or dancing with the one they plan to take home later. If there’s an overbearing drunk in the room, they might be a Leo, too. You can never tell which way it’ll go, but you can be sure it’ll cause a scene that demands attention.

If there’s a wallflower in the room just watching the action while sipping their drink, you’ve identified a Virgo. They’ll likely have avoided the bar fight, considered a game but opted out in favor of a drink and telling Gemini some tips on how to up their game, and will be thoroughly enjoying the people watching from their spot. And yes, they are judging Pisces with plenty of eye rolls and sighs from their spot.

The one dancing on the bar or singing drunk karaoke? That could definitely be adventurous Libra. Or they could be the one sucking face over in a dark corner. Libras are also the likely mark of a con, and friends of Libras may have to be extra vigilant to steer them away from a super-shady hookup or amazing get-rich-quick scheme they just found out about. Definitely sit the Libra with the DD for extra-watching.

You know that bar fight I mentioned? Scorpios will definitely be involved. Most likely, they’ll be the ones throwing punches or talking sh*t if Aries needs them to have their back. Or they’ll be the ones wading in to break up the fight. Either way, they’re a force to be reckoned with and not someone you want to piss off.

Don’t play truth or dare if you’re out drinking with Sag. They’ll likely either drop an unwelcome truth bomb on you or confess their undying love. Their high spirits could make them a fun drinking companion—until, that is, they’ve offended everyone else in the immediate area and skipped out on paying the tab.

The surly drunk at the bar who’s stubbornly arguing their point til the cows come home could certainly be Cap. But you’ll also find Caps in the ones who leave early because tomorrow is a workday or the one in the friend group who never volunteers to buy a round. Of course, Caps are also the ones cracking jokes and keeping the bar thoroughly entertained.

The one in the weird hat who just made 50 new Facebook friends at the bar is likely easygoing and friendly Aquarius. They could also be the one leaving with a super-hot stranger for a casual hookup, no feelings required.

With Pisces, you can pretty much guarantee they’re either making drunk love in the bathroom or getting rather philosophical over a pint. There is no in-between. If there’s crying going on in a darkened corner, you can be pretty sure that’s Pisces, too.

As the night bleeds into the morning it’ll be time to locate the designated driver or call an Uber — and head to a bed somewhere (yours or someone’s else’s). Go home sun signs. You’re drunk.

The Moon, Venus, and YOUR Relationships

The Zodiac Signs as Songs from Taylor Swift

4 Techniques to Ground Yourself By Element!

5 Hilarious Fails of Aquarius Trying to Comfort Someone

If you’ve ever accidentally let out an evil villain laugh or had a bad case of RBF, you know you’ve got a dark side....

Best friends are important. Everyone needs their ride or die, the true blue buddy we can count on no matter what. Let’s take a...

Even if you’re happy in a relationship or happily single, you’ve probably been through a breakup or two at some point in your life....

Got stress? Who doesn’t! On any given day, stressors abound. Slow traffic, overbearing bosses, long blogs before you can read an actual recipe, and...

Q: Why did the chicken cross the road? A: To get to the idiot’s house! What, nothing? Okay, let’s try a different joke… Me: Knock, Knock! You: Who’s...

August 23 to September 22 Polarity: Feminine/Receptive Quality: Mutable Element: Earth Symbol: The Virgin Keyphrase: I Analyze Ruler: Mercury/Chiron Virgos have the reputation of liking to clean. Newsflash: They hate it. What they...
© 2023 AstroVibe. All Rights Reserved.